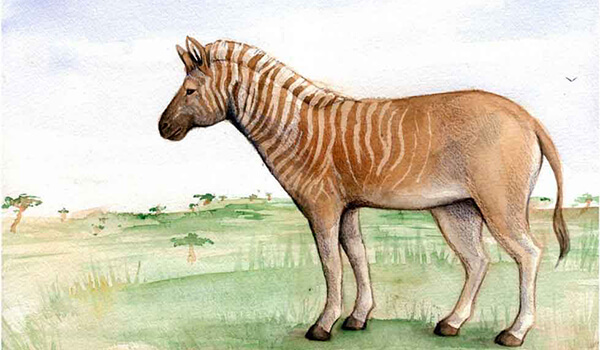 The Quagga was more successful in choosing pastures than many of its relatives. Although they often competed with the more numerous wildebeest that lived in the same areas. The quagga were the first herbivores to enter tall grasslands or wet pastures. They lived almost entirely on grasses, but occasionally ate bushes, twigs, leaves, and bark. Their digestive system allowed for a diet of plants of lower nutritional quality than other herbivores would need.

It appears that the animal had some parts of the body that had almost no stripes, and other patterned parts, reminiscent of the extinct Burchell’s zebra, which had stripes on most of the body, with the exception of the back, legs and abdomen. The zebra had a broad, dark dorsal stripe on its back, which contained a mane with white and brownish stripes.

The flora of South Africa is the richest in the world. 10% of all the world’s specimens grow there, which is more than 20,000 species. Surprising herbs, bushes, flowers (80%) are fragrant on vast territories, which are not found anywhere else. The flora of the Western Cape is the richest, with over 6,000 flowering plants.

Previously, numerous herds of quaggs shook the space of the South African savannas with the clatter of hooves. Artiodactyls led a nomadic life, moving constantly in search of food. These herbivores often migrated in large herds.

Quaggas were very sociable creatures, forming large herds. The core of each group consisted of family members who lived with their natal herd throughout their lives. In order to gather the scattered members of the community, the dominant male of the group made a special sound, to which other members of the group responded. Sick or crippled individuals were cared for by all members of the group, who slowed down to match the slowest relative.

Each of these herds controlled a rather small area of 30 km². When migrating, they could cover long distances of more than 600 km². Quaggs were usually diurnal, spending their night hours in small pastures where they could spot predators. During the night, the members of the group woke up one by one to graze for about an hour, without moving far from the group. In addition, they always had at least one herd member of the community to keep an eye out for potential threats while the group slept.

These mammals had a polygamous harem-based mating system where one adult male controlled a group of females. To become the dominant stallion, the male had to alternately lure females from other herds. The stallions could gather around the herd, which included a mare in heat, and fought for her with the herd male and with each other. This happened 5 days every month for a year, until the mare finally conceived. Although foals can be born in any month, there was a definite annual birth/mating peak in early December/January which corresponded to the rainy season.

Quagga females, which were in good condition, bred at 2-year intervals, having their first pup between 3 and 3.5 years of age. Males cannot breed until they are five or six years old. Quagga mothers cared for a foal for up to a year. Like horses, little quaggas were able to stand, walk, and suckle milk shortly after birth. The cubs at birth had a lighter coloration than his parents. The foals were guarded by their mothers, as well as by the lead stallion and other females in their group.

The experimental herd consisted of 19 individuals from Namibia and South Africa. They were chosen because they reduced the number of stripes on the back of the body and legs. The project’s first foal was born in 1988. After creating a quagg-like herd, the project participants plan to release them in the Western Cape. The introduction of these quagga-like zebras could be part of a comprehensive population recovery program.

O’Barry, a former dolphin hunter dedicates his life to saving dolphins: an amazing story
O’Barry used to hunt dolphins, but now he does
020